5 Types of Water Treatment Plants and Their Applications 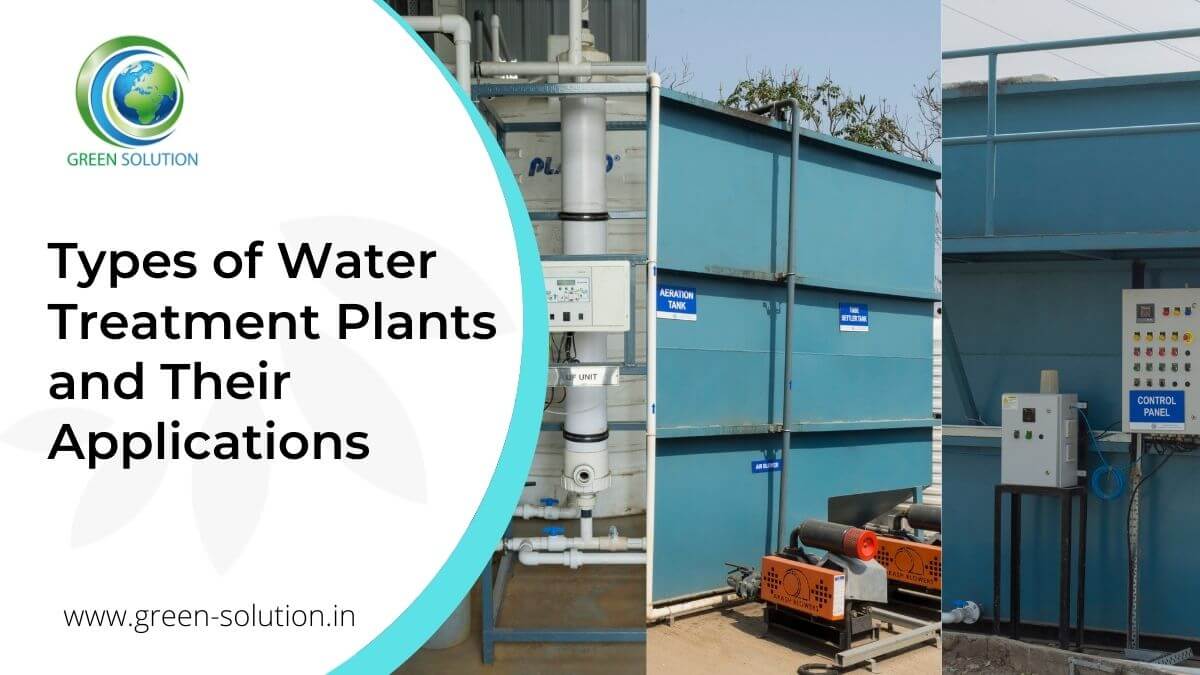 It has become more important and critical than ever in the 21st century to have clean water and environmentally friendly industrial activities. Most industries use water in one way or another in their processes. Once this water is used, it needs to be treated before being disposed of so that it causes no detrimental impact to the environment, whether it is disposed into the natural environment or into sewage networks, the chemical and physical properties of the wastewater need to comply with current regulations in order to protect one from legalities as well.

Here is where a water treatment plant becomes the need of the hour as it can help commercial and industrial facilities become environmentally friendly as well as compliant in their wastewater disposal.

In this blog, we will cover the four types of water treatment plants, how they work and the many industrial applications of each type.

Wastewater is the water that originates from water used in domestic, agricultural, industrial as well as medical or transport activities.

Basically, wastewater can be divided into two:

These plants remove contaminants/sewage waste from households, commercial buildings and sometimes even get an inflow of commercial wastewater too. It can also receive rainwater and debris from sewers.

STPs play a critical role in keeping residents healthy and safe by cleaning wastewater with a bunch of chemical, physical and biological procedures before disposing it into the environment.

During this phase, the wastewater moves into the clarifiers. The wastewater flows sluggishly in the settlement basins. It is the design of these tanks that result in settling, that is, the organic solid matter collects at the bottom of the tank while the lighter matter floats to the top becoming easier for removal.

The organic matter that settles at the bottom is known as a primary sludge blanket. After a few hours, the sludge that has settled in the clarification tanks moves into aeration basins to carry out another process called the activated sludge process.

This treatment phase consists of aerobic aeration. Aeration basins contain aerators, these have a system of pipes or tubes attached to them. They are made of ceramic or rubber membranes that have small holes in them for air to pass through. When this air flows through the aerators, the small holes present, turn them into bubbles and they get mixed with the water column. This interaction of the oxygen with the bacteria in the sewage results in the bacteria digesting the organic matter that gives wastewater the characteristic appearance and smell.

It is this phase that is also involved in the removal of harmful chemicals. Once aeration is over, the wastewater flows in the next tanks, i.e, the secondary clarification basins. It is in this that the bacteria spend a day or two settling in the bottom and forming a sludge blanket, which the water treatment plant can then pump out.

After the sludge blanket has completely settled, it becomes return activated sludge (RAS). This RAS goes back into the primary clarification tank and the bacteria in it aids in breaking down any organic matter in the sewage.

Once RAS has completely gone through both the primary and secondary clarification basins continuously, i.e several times, it is turned into waste-activated sludge (WAS). The WAS then does not go back to the primary clarification tank but instead moves to the covered tanks, also known as aerobic sludge digesters. In these tanks, the bacteria do not digest the organic matter present in the wastewater, but the activated sludge begins to digest one another, causing most of the sludge to then disappear.
Finally, the remaining sludge moves to the dewatering facility that contains dewatering tanks where the plant uses belt presses to squeeze any remaining water out of the sludge.

Tertiary treatment follows the process of both primary and secondary processes but also in addition involves mechanical and photochemical processes. This is a more advanced treatment and is very useful in sanitary sewage with microorganism contaminants that need to be disinfected.

In this phase of the treatment, wastewater is passed through sand filters, which remove very fine particulate matter. The photochemical process comes in after this, where the water flows under ultraviolet (UV) lights, which eliminate any bacteria and viruses as well as remove any infections.

Thus, once the wastewater in the sewage water treatment plant has undergone the three mentioned stages above, it is completely safe to flow into the environment as an effluent.

As previously seen above, sewage treatment plants provide initial treatment for domestic or municipal purposes. Effluent treatment plants, on the other hand, are quite the opposite as they treat industrial effluent, that is, the wastewater that occurs as a result of the flow of byproducts from industries.

Like STP’s, even ETP’s involve a process of preliminary, primary, secondary and tertiary treatment.

ETP’s are used in sectors that have high and extensive chemical contamination in the wastewater, such as manufacturing in pharmaceuticals and chemical industries such as textile and dye manufacturing.

In water treatment for industrial purposes, demineralization typically involves the complete removal of dissolved solids or minerals from feedwater (i.e., deaerated water that is supplied to a boiler from a tank for conversion into steam) or process streams.

This water treatment plant works on the principle of ion exchange. In these plants, special ion exchange resins are manufactured that help to replace any mineral salts in the water. There are two types of resins- one is an anion one while the other is a cation one. These former resins release hydroxyl ions which are negatively charged while the cation resins release hydrogen ions that are positively charged.

The cation-exchange resins lead to softening of water, the anion-exchange result in the removal of nitrate from wastewater and the combination of both the anion and cation exchange removes virtually every ionic contaminant present in the feed water with a process called deionization. This results in water of exceptional quality.

Demineralization leads to the complete removal of minerals from the water and is generally used in industries that require water with high levels of purity, for example- makeup or feed water in high-pressure boilers, the food and beverage industry, and process streams used in the manufacturing of electronics. They are also used in industries for the generation of steam, power and cooling.

The principle of reverse osmosis (RO) functions on the filtration method that results in the removal of a large number of contaminants and impurities from wastewater by applying pressure to it when it is on one side of a membrane.

This water treatment plant works by using a high-pressure pump that increases the pressure on the salt side of the RO and forces the water across the semipermeable RO membrane (which allows some atoms and molecules to pass but not others), leaving almost 95%-99% of dissolved salts in the reject stream. In other words, as the wastewater enters the RO membrane and pressure is applied, the water molecules pass through the semipermeable membrane while the other salts are not allowed to pass through and discharged to the reject stream (also known as brine stream or concentrate).

To gain both the peace of mind of being responsible as well as environmentally aware when it comes to your water treatment plant and wastewater disposal, work with Green Solution. We provide turnkey solutions and services that help you spend less time worrying about waste management and give you more time to focus on what matters- your industries core activities!